‘Pretty in Pink’ still great more than 30 years after release 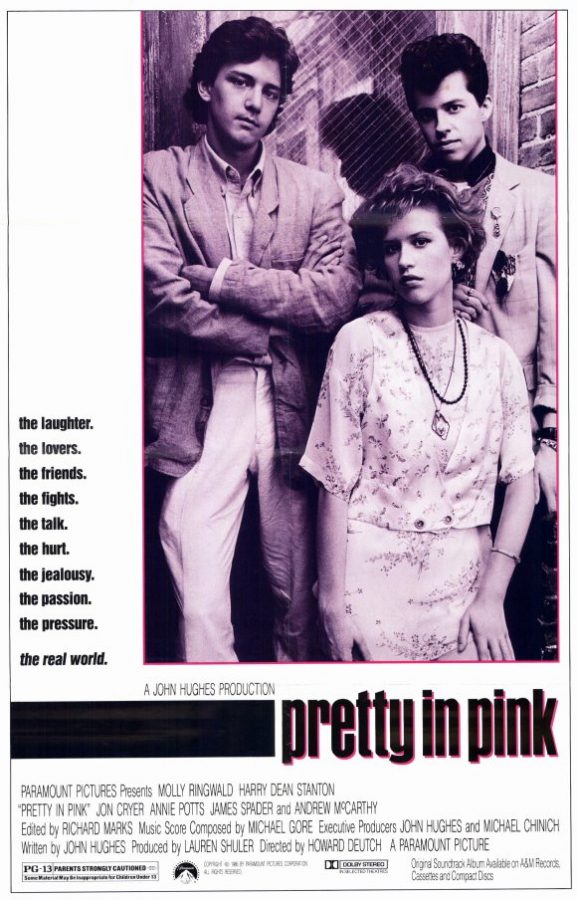 This was originally written as a paper for AP Language and Composition and was edited to function as a newspaper article.

Any movie with astounding actress Molly Ringwald is a must-see, and Pretty in Pink is one of those movies! This “dramedy” is a true 80’s classic, with the standard Cinderella storyline.

The main character Andie (Molly Ringwald) is an outcast in her Chicago high school but is close friends with quirky Duckie, (Jon Cryer) who has an enormous crush on her. Yet, she catches the eye of the rich and lavish boy at school Blane (Andrew McCarthy). Andie lives with her unemployed father in a small suburb of Chicago, while Blane is surrounded within a luxurious lifestyle.  As Andie begins to fall for Blane, she realizes the hardships of dating within different social and wealth spheres.

The two come from two completely different home lives, and it’s difficult for Andie to believe Blane would fall for a girl like her. She slowly but surely gains confidence towards the end of the film, standing her ground and accepting her differences with Blane. It shows how powerful and confident Andie truly is and gives her character such depth, which overall makes this film stand out from others.

The costuming truly captures the 80’s. Andie is seen wearing lots of pastel pinks, feminine blazers, and floral prints. She is accessorized with black hats with floral detailing, pearl necklaces, and loud earrings.

Andie’s most iconic look in this movie is her beautiful, hand-sewn pink prom dress seen at the end of the film. It has a halter neckline with lace detailing and a sheen of polka dots over the pink fabric. Her outfits add such depth to this vintage film with the pastel colors and noticeable accessories.

Another main character, Duckie, is notorious for his strange yet stylish outfits. He wears lots of clashing colors, for instance a brown and red checkered vest and bright yellow blazer. He is always wearing his white tuxedo shoes, brown hat, and black oval glasses. The costumes in this movie make it visually pleasing to watch and represents the time period perfectly.

The choice of music in this film takes viewers along the rollercoaster of emotions the characters experience. One of the most well known songs this movie features is “If You Leave” by Orchestral Manoeuvres.  The song symbolizes the separation between Andie and Blane and the lyrics seem as though Blane is one singing to her.

The classic music in this film goes alongside Andie’s workplace perfectly, which is a groovy record store. The directors emphasized the importance of  music by showcasing famous songs in the setting of the store. For example, when character Duckie impersonates Otis Redding by lip-syncing and dancing to the song “Try A Little Tenderness” to Andie, expressing his true feelings for her. It is an iconic and memorable scene due to the emotional music.

Overall, this movie is well produced and executed through the talented actors, stylish costuming, and emotional music. I would rate this timeless movie a 4.5/5 due to my interest in the fashion Andie wears throughout it and the great soundtrack. I would highly recommend this movie to people from the ages of 14 on up.